The terms ‘PCOS’ and ‘insulin resistance’ frequently crop up together when first researching the causes, symptoms, and ongoing effects of polycystic ovary syndrome. But what exactly is insulin resistance (IR)? Is the correlation between the two causative? And if there is an association between PCOS and insulin resistance, what can you do to lower your risk? These are all questions worth asking, as 8% of patients with PCOS go on to develop type 2 diabetes annually, and by age 40, more than half of women with PCOS have type 2 diabetes, according to the CDC. Given that insulin resistance is informed by environmental and genetic factors, in combination with chronic conditions – such as PCOS – it can feel difficult to parse out exactly what role PCOS has, if any, in promoting IR. That’s why in this article we’re going to walk you through everything you should know about PCOS and insulin resistance, covering:

Understanding the role of insulin in the body

Before we explain what insulin resistance is, let’s backtrack and cover exactly what insulin is. Insulin is a hormone, produced by the pancreas, and it is in charge of helping glucose in your blood enter cells in your muscles, fat, and liver (where it is then used for energy). In times of fasting, your liver can also make glucose, but for the most part you get glucose from the food you eat. Typically your blood glucose (or blood sugar) levels rise after you eat, and your pancreas releases insulin into the blood. Insulin also lowers blood glucose to keep it in the normal range. So insulin is a big player in both making sure that glucose enters your body’s cells, while also helping lower blood glucose levels to keep it in normal range. This raises the question: how are these processes affected if you become insulin resistant?

According to the National Institute of Diabetes and Digestive and Kidney Diseases, insulin resistance “is when cells in your muscles, fat, and liver don’t respond well to insulin and can’t easily take up glucose from your blood.” As a result, “your pancreas makes more insulin to help glucose enter your cells,” and as long as your pancreas can make enough insulin to compensate for your cells’ lack of response to insulin, your blood glucose can stay in a normal range.

If your cells do become desensitized to insulin (in the case of type 2 diabetes), and do not respond normally to the production of insulin by the pancreas, your blood sugar levels can remain too high for too long. Over time, this is bad for your health because it damages nerves in your hands and feet (known as peripheral neuropathy), can cause permanent damage to your eyes and eyesight, and can even lead to heart disease and other problems.

Here are some risk factors for insulin resistance and/or prediabetes:

We’ve covered general risk factors, both to do with genetics and environment, that may make someone more susceptible to developing insulin resistance. But what causes IR in some and not in others? Well, unfortunately, researchers don’t know everything about insulin resistance, including why it manifests differently in comparatively similar patients, but they believe that weight and physical inactivity are strongly associated.

In particular, fat stored in the abdomen – regardless of BMI –  are associated with health concerns. Research indicates that waist measurements can be predictive of insulin resistance, even if BMI falls within normal range. As we spoke about in our article on PCOS and gut health, much more research needs to be conducted to understand the impact of the stomach on hormones, but “studies have shown that belly fat makes hormones and other substances that can contribute to chronic, or long-lasting, inflammation in the body.” Since we can’t control where fat is stored (and we also can’t target fat loss in one specific area and not others), being mindful about what we do exert influence over can be useful. In particular, incorporating more physical activity you enjoy into your daily routine, limiting processed foods, and focusing on consuming more macronutrients (think vegetables and fruits) can be helpful in limiting the accumulation of excess fat where possible.

This brings us to our next risk factor: inflammation has also been linked to insulin resistance. One review found that while obesity is a major cause of insulin resistance in type 2 diabetes, recent insights show that “chronic, low-grade inflammation associated with obesity is an important etiologic mechanism in decreasing insulin signaling.” It is thought that inflammation is antagonistic to gut health, leads to an increase in C-reactive protein levels in the blood, and impairs the production of leptin, which works to regulate metabolism and appetite. Although there is still debate as to what comes first, weight gain or inflammation, it does seem that inflammation compounds to result in negative health outcomes. Check out this article for more information on the link between obesity and inflammation.

Finally, we turn to the issue of physical inactivity. An increasing number of occupations are sedentary as technology advances, but one research review that examined articles dating from 2013 to 2016 on the impact of physical activity (PA) on insulin resistance indicates that it could be overwhelmingly helpful in decreasing IR. Specifically, moderate intensity exercise for 30 minutes 3 to 5 days a week “is associated with improved SI [whole-body insulin sensitivity] and glycaemic control.” This benefit is apparent across age-ranges, including those with prediabetes and with diagnosed type 2 diabetes.

There appears to be a strong correlation between having PCOS and developing insulin resistance (there is evidence that male relatives of those with PCOS could be more likely to develop diabetes!). As we touched upon at the beginning of this article, the CDC reports that over 50% of women with PCOS develop type 2 diabetes by age 40, and recent research seems to indicate that part of insulin resistance in women with PCOS is “independent of obesity and related specifically to PCOS.” Indeed, as opposed to PCOS triggering insulin resistance, it could be the case that insulin resistance plays a role in aggravating PCOS: elevated insulin levels may worsen inflammation and signal to the ovaries to produce more testosterone.

This can interfere with follicle development and subsequently prevent ovulation (both PCOS and insulin resistance can increase one’s chances of infertility). On top of this, the potential weight gain from insulin resistance can worsen PCOS symptoms, as excess fat can cause the body to produce even more insulin. This vicious cycle can be extremely demoralizing and psychologically distressing, as PCOS’ complicated physiological roots make it difficult to pin down a single solution.

Symptoms of insulin resistance if you have PCOS

Symptoms of insulin resistance, if you have PCOS, are much the same for those with people without it. They can include:

These above symptoms are all signs you should make an appointment with your doctor to discuss the possibility of insulin resistance.

How to protect against insulin resistance

An excellent step toward preventing or mitigating insulin resistance begins with maintaining healthy blood sugar. We go in depth on this topic in our article on PCOS and Sugar, but suffice to say that nutrition is a critical component of keeping blood sugar levels stable, and trying to limit spikes and crashes.

Try offsetting the glucose in your meal with fiber, protein, and fat foods, filled with macronutrients that take our bodies longer to process, break down, and digest. The extra digestion time required by high-nutrient, high-fiber foods (such as vegetables and fruit) means that blood sugar rises and declines more steadily, which translates to more consistent energy levels throughout the day and fewer blood sugar crashes that can intensify cravings and fatigue. 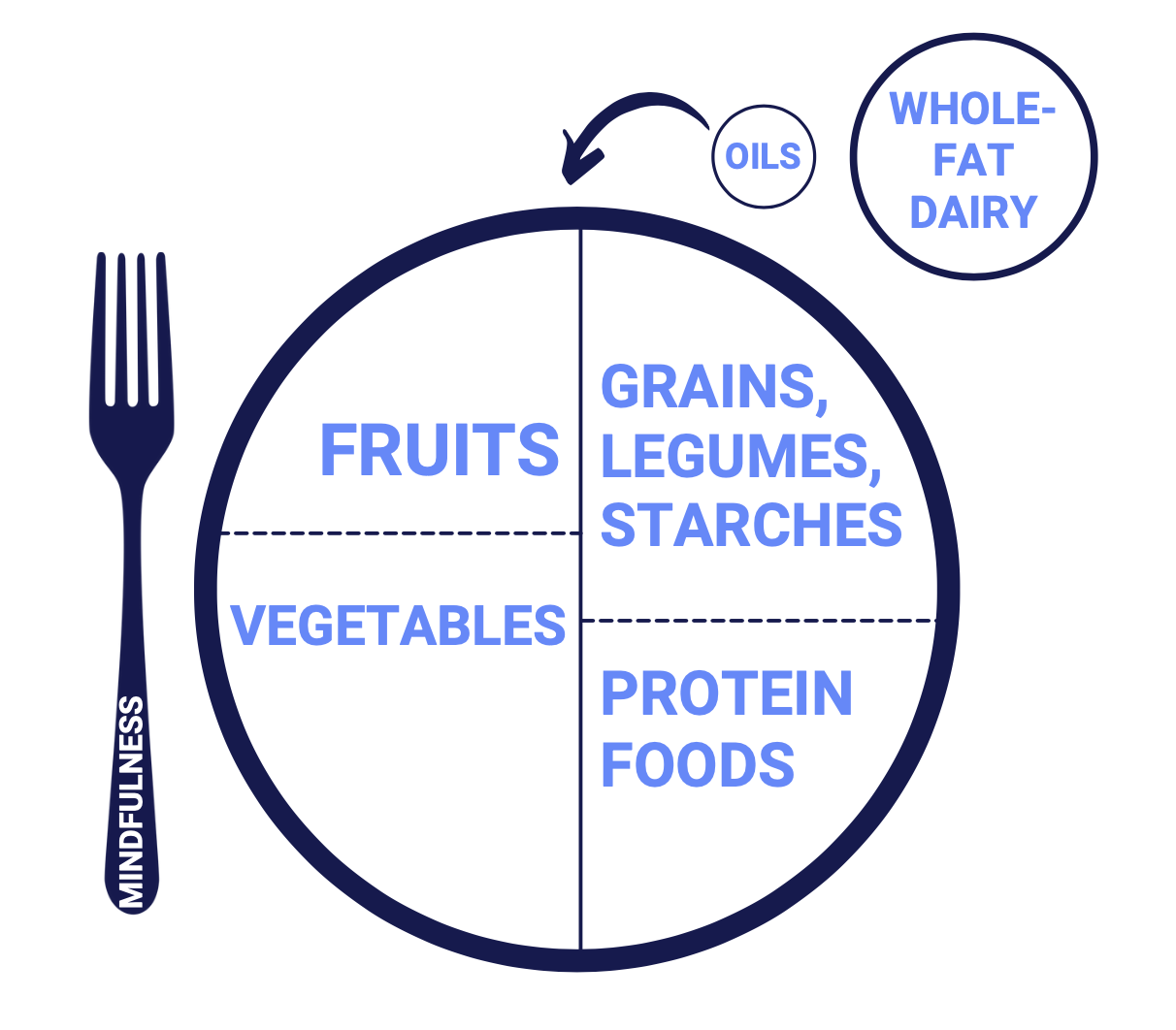 Consider swapping refined grains for whole grains (such as white rice for black rice or brown rice), and store bought candy for home-made (for instance, when you cook at home, you can control the amount of sugar you want added, as well as have implement healthy swaps, such as apple sauce or peanut butter for oil), and prioritize fiber (fruit is a delicious source of both nutrition and fiber). More fruits, nuts, whole dairy, whole grains, and vegetables are sure to to offer your body higher sources of fiber alongside glucose, which will keep your blood sugar levels more steady and keep you feeling satiated for longer.

We all know about the conventional 3 meals a day, but what about 6 smaller ones? One recent study suggests that higher meal frequency may “improve insulin secretion.” This may also help offset cravings, which can be triggered when your blood sugar levels fall. It doesn’t have to be 6 strict meals a day, though: eating mindfully, avoiding processed foods, and honoring your hunger cues are all about preventing blood sugar spikes and having ‘rolling hills’ instead. 6 meals can be useful as a guide, but feel free to experiment with meal times, quantities, and frequencies that match your lifestyle.

Sometimes opting for a diet coke instead of a regular coke can feel like a good way to reduce your sugar intake, but unfortunately there are many downsides to them, including damaging gut health and potentially making insulin resistance worse. To be clear, there is nothing inherently ‘wrong’ with sugar: it can play an important role in many people’s favorite meals and social gatherings, but given its low nutritional value, it should be enjoyed in moderation. Non-nutritive artificial sweeteners carry their own risk profile, and should be approached with caution, especially for those who may be more predisposed to insulin resistance.

Allara Health provides personalized treatment that takes the guesswork out of managing PCOS, and offers a customized, holistic plan of attack that merges nutrition, medication. supplementation, and ongoing, expert support to begin healing your body.